In 1954, Colin Fulton began a one truck cartage venture driving a 1952 International. He would cart sand around Melbourne for sites such as St Vincents Hospital and carry out rubbish removal for city hotels after 6 o’clock closing, in prepartion for the 1956 Olympic Games. Colin and his wife, Esma slowly began selling sand and cement from the family’s backyard at 15 Hall St East Hawthorn via Cato Lane. He expanded his one man operation, employing 3 men and purchasing 2 Chevrolets and another International. By this time Colin and Esma had 3 children – Ken, Ian and Jill. The Fulton’s then purchased number 17 Hall St, still operating from the backyard of the two properties. The number of employees rose to 6, the fleet of trucks now numbering 7. Colin then took control over the yard, while the men continued the cartage. By the mid 60’s Ken and Ian had completed their schooling and began work in what was to become a family business, learning how to drive and maintain the trucks and operate the yard machinery; by this time Colin and Esma’s fourth child, Peter, was born.

By the early 70’s the business branched out into garden supplies and began to use earthmoving machinery – bobcats and loaders. Boom time in the 70’s led the business to expand further – the fleet of registered trucks and machinery numbering near 30. Number 19 Hall St was also purchased around this time – the business still running from the rear of the 3 adjoining properties. At this stage Ken took a more active roll in the running of the business, while Ian and Peter carried out cartage.

As the business expanded, the need for more space meant the houses had to go. The area was declared light industrial by the council and the first house to be moved was 19 Hall St – which was transported to Sunbury around 1980. The second house to go was 15 Hall St in the late 80’s – demolished by one of the company’s bobcats. In approximately 2004 the last house was demolished. The office then moved to 21 Hall Street and this remains to be the case today. The business, which became a company in the mid 80’s, now has over 25 registered vehicles and employs 24 full time staff. The fleet of vehicles now includes trucks that vary in size from 2 cubic metres to 20 cubic metres, a bin truck,3 bobcats and an excavator. 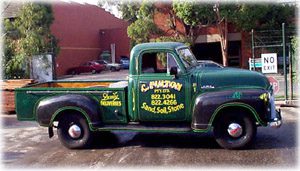 When Colin purchased his first Chevrolet, he wouldn’t have dreamt that it would later become a symbol for the company and a local icon. However today, with more than 6 Chevrolets still working to deliver building and garden supplies in and around Melbourne, they have withstood the test of time, and become a part of the company’s image. Colin’s passion for Chev’s was well known. He would seek them out, often buying vehicles others would deem “beyond repair”. But with a thorough knowledge of the trucks, Colin would restore them to their former glory, a knowledge and devotion he was to pass on to his son Ian, who used to maintain and restore the company’s fleet of trucks along with a full time mechanic. Unfortunately, 1997 saw the passing of Colin. His three sons Ken, Ian and Peter continued to operate the business in the way it had always been run; with attention to detail, quality and customer service.